I learned the most wonderful new acronym recently: Hold On Pain Ends. It’s funny how simple it seems, but how difficult it can be to practice sometimes. I’ve written before about what it means to keep on hoping through desperate or painful or sad times. But this phrase carries a lot of special meaning for me. I recently stumbled across a picture of myself from nine years ago. It stopped me dead in my tracks. I almost didn’t recognize the face staring back at me. Young. Vibrant. Happy. Successful. I wondered how just nine years could age me so much. And here’s the real kicker – that photo was taken at about 1:30 a.m. after working nearly non-stop for three days on a big proposal at my consulting firm. I should have looked ragged and tired and worn. I couldn’t even physically work those hours today, much less look good doing it at 1:30 in the morning the third straight day.

So what was it about that time in my life? I was five years into this migraine ordeal. I was clearly working way too much. But I had held on. At times where there seemed absolutely no reason to believe that my pain would lessen, much less end, that I could find happiness given some of the struggles I was dealing with, reeling from the loss of some of my closest loved ones. I held on. I continued to HOPE. Against reason, against odds. And one day, 6 months prior to that picture being taken, I was put on a new drug protocol by a truly remarkable team of doctors at the Michigan Headpain and Neurological Institute in Ann Arbor, MI. And the pain became less. It strengthened me. It renewed me. When I say I look at that picture and I see success, it is not because I was making a ton of money or even that we won that contract; we lost it in fact. But I was more able than I had been in a very long time. I was able to work for days on end with almost no breaks for sleeping or eating. I was able to sit in that conference room, working through ridiculous amounts of paperwork, barking orders at people three times my senior for their lack of focus and stop to smile pretty for the camera for my new employee photo that just had to be taken at that exact moment because it was the first time I’d been in one place in the office long enough to for the girl from HR to track me down!

All that is well and good, but putting things in perspective, there were five years there prior to that moment when one treatment after another DIDN’T work, right? And during that time I dealt with some things I wouldn’t wish on my worst enemy, both physically and emotionally. I had learned a hard lesson early on in this migraine thing. HOPE is essential. But so is managing your EXPECTATIONS. If I had continued, as I did in the beginning, to EXPECT each new treatment or medication or procedure, or whatever, to work, I would have lost hope. I have not a doubt in my mind. Learning early on that most things were NOT going to work allowed the treatments that have had positive impacts be more successful, their results more genuine and the overall effects on my pain, my life and ability to maintain hope exponentially greater than if I went into each one expecting it to be “the one.”

When that treatment regimen that I began in July 2005 started working, it hit me out of the blue. The alleviation of my symptoms felt like it fell right out of heaven, knocked me on the head and bounced half the pain right out of there! There was no false positive. No placebo affect. I had approached my treatment for so many years with the “hope for the best, expect the worst” frame of mind that when real, measurable improvement came, it sent me soaring. I couldn’t doubt it. And for a long time after that the quality of my life truly was immeasurably changed. It was that change, in fact, that allowed me to deal with the death of my fiance, by far the most difficult thing I’ve ever experienced. And that series of events, I know, happened in sequence just as it was meant to.

The marrying of those two essential functions – managing expectations and maintaining hope has saved me so many times. But I failed at one of them in an extraordinary way last year. After the last post, Suicide Won’t Fix It, I got a lot of feedback and a lot of tough questions. Some people were shocked. Some were sad, angry, confused. All of this, I expected. But the only explanation I can offer is this – I failed at managing my expectations. When I learned that I was a candidate for the neurostimulator implant surgery, I allowed my doctors to set my expectations at a completely unrealistic level. I envisioned no pain. I saw doors and avenues that have long been shut flinging wide open again! I saw absolutely limitless potential, every possibility available once again. I saw a new life. I saw a new me. After 12 1/2 years of very successfully managing my expectations, I made that one very grave mistake. And I rode the high of those expectations all the way to the moon. And when reality clashed with those expectations, I lost. I fell. HARD. It was the crushing blow that at one time I had been cautious enough to protect myself from, but from which I was at last was feeling the impact. When I came crashing down from that high, I crushed every ounce of hope I had managed to hold on to for nearly 13 years.

It’s one thing to live with chronic pain and to know that even with limitations, there are still some things that work; moments of feeling well, daily success stories. It is quite another to suddenly think you are on the brink of a new life, and to fall crashing back into that seemingly bottomless pit. So I urge you – whatever it is you deal with – migraines, fibro, depression, anxiety – manage your expectations and maintain your hope. It comes in many forms, but one way or another, in small ways or in big ones, if you do Hold On..the Pain does End.

There are some other interesting reasons why this acronym is so close to my heart. And this goes to show that things really do come full circle. When I was in middle school, I was obsessed with horses….mine in particular. Her name was Hope. I didn’t name her that; she came to me that way. And it was perfect. I had several posters in my room at the time. One was a herd of wild horses galloping down a beach. It was magnificent and there was one horse who reminded me so much of my Hope. And directly across from it on my other wall was a very famous poster with a picture of a tiny kitten hanging from a branch with the words “Hang In There.” I remember reading those words so many times over and over during difficult moments. And now, with this fabulous new acronym, those three wonderful things from my childhood – my horse and my two favorite posters are melded into one incredibly powerful phrase…Hold On Pain Ends. Some day I hope to be well enough to run a wildlife rehabilitation center. I have known for many years that if I am able to do it, I will name it New Hope Ranch. This lesson; this phrase; this entire lifetime of experience shows me that it is still the goal I must keep holding onto and keep striving to reach. 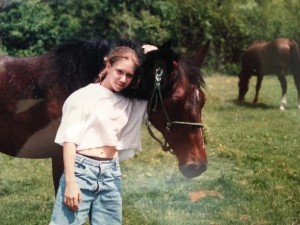